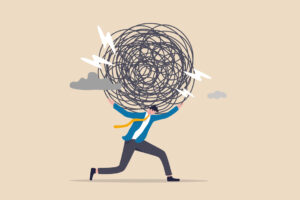 When we hear the word stress one thing comes in mind, anxiety. We have correlated these two words for so long that even the sound of “stress” could give a person anxiety. Some people will avoid reading this just by seeing the headline, others might just soldier on, reading, even though their heart and breath rate has increased.

Firstly, we need to clarify one thing, what is stress? Stress is anything that can evoke a biological response (i.e. a lion running at you or a drink with high sugar content). The comparison might seem stupid at first, but the truth is, they both are extrinsic factors that have a domino effect on our body. The previous example, seeing the lion scares you and your body immediately tries to send messages to avoid getting killed. Drinking a very sweet drink gives you similar signals, but it takes longer to take effect. The lion kills you almost instantly (if you don’t run away); too much sugar though could take years to slowly disintegrate your pancreas. Therefore, the lion and the drink with lots of sugar are stressors; they put stress on our body, asking for a response from our organs and nervous system. The main difference they have as stressors is the time they are exerted on us. The lion causes short term (acute) stress, while high sugar intake for years causes long term stress (chronic).

Why do we correlate stress and anxiety so often? Anxiety is a long term (chronic) stressor. Anxiety isn’t as “visible” as a fierce lion running your way, neither can you run away from it. Anxiety nowadays comes from complex problems in everyday life. Its hard for us to accept some things and harder to solve others. Therefore, we end up having lots of stressors (problems) that linger in our mind, giving our body a constant message that we are under attack. These “messages” start from the brain, travel down neurons, nerves, and synapses to act on organs, cardiovascular system, muscles and even your hair follicles. If our brain sends messages to any destination, via a highway of nerves, there must be middlemen that act like messengers.

Example: If I want to write a letter to you, I’m concerned that you have been drinking too many sodas lately. I’ll write a specific letter, close it in an envelope, stamp it, take it to the post office, the post office will process it then give it to a mailman that uses a vehicle to deliver it to you, then you will hopefully understand my concern and stop drinking them too much. In this case, the person writing the letter is the brain, the letter with the envelope and stamps are the message, the mailman and his vehicle are the messengers, and you the recipient are the organ that is supposed to respond accordingly to the situation. Furthermore, there will be a back and forth of letters between us, exactly how the brain communicates with the rest of the body. That is until you get tired of me telling you to stop drinking something you love, which is similar to the point we lose control of our anxiety and the stressors that drive it. Based on this example, the result is an overflowing mailbox meaning the synapses firing all over the place. This entails pathophysiological complications due to the loss of homeostasis. To end this metaphor, think of hormones and neurotransmitters as letters to an organ they care about. Each hormone and neurotransmitter have a function to discourage or encourage an organ to do something.

When our organs or body in general becomes overwhelmed with “letters” over time, it is time to seek help from a professional to bring things back in balance (reinstate homeostasis).

How stress affects everyday bodily functions? The focus here though will be anxiety as a stressor, we won’t be talking about lions or sodas anymore. Think about your everyday routine and the events that make you overthink, like being stuck in traffic or having to pay more for something meanwhile your wages are the same. Thoughts like these tend to hyper-activate areas in your brain that respond to threats. The brain tries to compensate for this hyper-activation, to bring back homeostasis, resulting in structural changes in parts of the brain. This means alteration in our cognitive abilities, memory, and overall alteration of the nervous system. To elaborate, glucocorticosteroid and mineralocorticoid receptors (corticotropic receptors) accept “messages” in different parts of the brain, each part processing the message differently. Hippocampus, plays a key role in converting short term memory to long term memory, and cognition. It goes without saying that duration and intensity of stimuli to the hippocampus play a role in outcomes. Short term, mild stress has shown to help us solve problems faster or build a long-term memory of a bad event. Chronic stress though results in an atrophied hippocampus long term, which also means a decreased ability to process thoughts, form memories, or take a decision.

The immune system plays a role in the degeneration of parts of the brain, to some extent. Some inflammatory proteins encourage mood disorders and decline of cognition. How “stress mediators” affect the immune system? We have a set of organs that make up the neuroendocrine system, one of those organs is called the hypothalamus. The hypothalamus is also part of a system called the limbic system, where it cooperates with the hippocampus. Once again there is a back and forth of information between them, but in cases of chronic stress, just like the hippocampus, the hypothalamus is also over-stimulated. The result is the secretion of stress mediators like adrenocorticotropic hormone and corticotropin releasing hormone, among others. These stress mediators inhibit production of immune mediators but also decreases their effect on target cells. Therefore, fighting viruses, bacteria or malignant cells becomes a difficult task.

Our cardiovascular system carries the cells of our immune system and hormones that act as messengers of stress. What are the effects of stress mediators on our heart and arteries? Research has shown for a few decades that stress/anxiety is a risk factor for cardiovascular disease. The evidence shows that an increased heart rate for years, high blood pressure and the stress mediators, have a direct correlation with cardiac infarction, stroke and thrombosis. Something interesting has come out from studies on this matter though. It was shown that depending on the individual and how they deal with stress, their stress mediators may have opposite effects in each individual. To be more clear, some people’s cardiovascular system coped in a more positive way under stressful situations. The difference is that some people activate their parasympathetic and others their sympathetic nervous system while under pressure. Professionals have developed training programs to activate the parasympathetic, or at least downregulate the sympathetic, in order to decrease blood pressure and atherogenesis. We must also keep in mind that age and gender plays a major role, oestrogen has been shown to be a major protective factor.

Our gastrointestinal system (GI) is also affected from stress. Once more stress mediators send messages to an “organ”, the GI. The GI having its own innervations, receptors and mediators, copes with stressors in its own way. The effects of stressors on our GI could be loss or increase of appetite, acid reflux, bloating, cramps and change of the commensal bacteria balance. In the upcoming weeks we will come back to this topic with more details on the brain-bowel axis. Few years ago, researchers have characterized the GI as a second brain in our body, because of how bowel affects the brain and our mood; also, how the brain affects our eating habits, making this an infinite loop of an unhealthy lifestyle or a very healthy one.

Last but not least, we need to briefly mention the effects of stressors on the reproductive systems. Our pathophysiology behind is different for males and females, but the bottom line is that anxiety decreases fertility. Both sexes rely on the hypothalamic-pituitary-adrenal axis (HPA) for production of hormones that optimize fertility and arousal. The HPA axis produces hormones that signal other organs to produce other hormones to prepare the ground for sperm optimization in men and egg release from the ovaries in women. Men though could have low sperm quality and quantity when they suffer from chronic stress. In addition to that, libido, sexual drive and arousal is decreased due to excess cortisol (part of the HPA axis). In women population, stress entails lower sexual desire and irregular menstrual cycles. An irregular menstrual cycle means that is harder to predict the hormone cycle and the days its easier or impossible to conceive. Research supports that depression which is correlated to stress, is the leading complication in pregnancy. Moreover, we have to add in the factor of the immune system. As we mentioned before, stress suppresses several factors of the immune system. As a result both sexes may see exacerbations of infections that make reproduction impossible or decrease the chances of fertility.

To sum up, most people have similar thoughts in daily life. The difference between each individual is how we deal with certain problems. We all have ropes with knots, but we need to learn to take a rest, declutter, put the rope down. You won’t be able to untie those knots with bruised and cut up hands. Seek help from a psychologist. Try changing your sleeping pattern for better quality of sleep. Eat healthier. Exercise more often, especially outdoors. There’s no universal solution to get rid of stress.