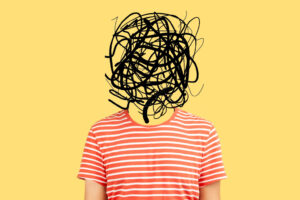 Psychologists believe that anxiety is a result of what we think.

Lets think of the example: which comes first, the chicken or the egg?

But if the PNS doesn’t kick in, the feeling of alarm locks the person’s focus onto whatever the amygdala is reacting to. In this case, the amygdala is reacting to a thought. So the mind, locked onto the “what if” thought, can’t think clearly. That is because our high-level thinking, or executive function, doesn’t work well, if at all, in a state of alarm. Feeling alarmed, the person can’t think through the issue with enough clarity to act on it decisively or dismiss it as irrelevant.

Let’s start with an example thought that I encounter often in my work: “What if something goes wrong with the plane?” The thought triggers alarm. If the PNS kicks in, it gets rid of the alarm and the person can think about how unlikely that is. Their mind is free to remember that there have been no fatal crashes of a major U.S. airline in almost 20 years. They dismiss the thought.

But if the PNS doesn’t kick in and get rid of the alarm, impaired executive function tries to deal with the question while in a state of alarm. Alarm colors the person’s thinking. Their mind may be operating on the principle that if there is alarm, and the alarm isn’t going away, there must be danger. Alarm forces the person to consider what is presumed to be dangerous.

Anxious fliers, for example, rarely ask me whether flying is safe or not; they ask how dangerous flying is. They imagine what might go wrong. This leads their brain to recall photos of crashed airplanes. And that leads to videos on the news of grieving family members. That, inevitably, becomes personal. “What would my child feel? What would they do without me?” This sequence has been triggered by a thought that, had the PNS been working properly, would have been dismissed.

By the time the mind has gotten that far, it has triggered several shots of stress hormones. When our stress hormone levels go too high, we lose the ability to recognize what is imaginary and what is real. However, we are not aware of having lost it. This makes the terrible stuff going on in the mind seem real, because it is accompanied by alarm, tension, sweating, and increased heart rate. You feel sure your plane is going to crash.

Some say this is due to an overthinking mind. I disagree. This is not overthinking. It is impaired thinking due to an underperforming PNS. Impaired thinking happens when a person does not have the psychological processes needed to quickly and effectively activate their calming PNS. The PNS is supposed to counterbalance the system that revs us up, the sympathetic nervous system (SNS).

The SNS increases our arousal (increased heart rate, breathing rate, tension, perspiration) when stress hormones are released by the amygdala, the part of the brain that monitors what is going on around us and what is going on in the mind.

If the amygdala senses anything it is not used to, it releases stress hormones. It also learns to release stress hormones in response to any threat, even thoughts about an uncertain outcome.

The stress hormones cause a feeling of alarm to grab our attention. Obviously, we need to take note of threats. As soon as we notice what the amygdala is reacting to, the PNS is supposed to get rid of the feeling of alarm so we can think clearly and deal with the uncertainty.

But when the PNS isn’t doing its job, impaired thinking goes like this:

Here is the SOLUTION: Since the PNS isn’t working automatically, activate it manually. Link the feeling of alarm to the memory of being with a person who has a calming effect on you. When you are with a non-critical friend, signals from their face, voice, and touch/body language activate the PNS

Here is how you establish the link: When an anxiety-producing thought comes to mind, as soon as you notice the feeling of alarm, pretend your friend just walked into the room, greets you, and comes over and gives you a hug. If you respond in this way to the feeling of alarm, you will train your mind to respond automatically for you.